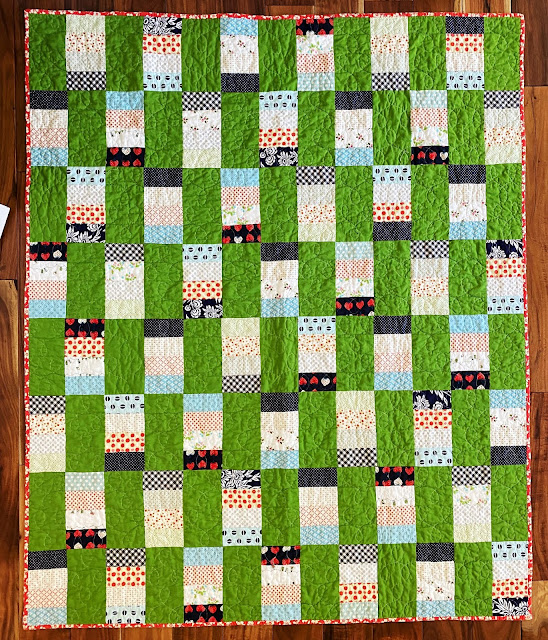 this very summery feeling quilt began with a navy blue strawberry fabric, and then a few more strawberries from my collection, followed by some blues to coordinate with that original fabric, some low volume picks, and a lush grass green to set them all off. it has a strong modern farmhouse vibe because of the style of fabrics i selected which all revolve around the berry theme, either actually featuring berries or in the same colors as the inspiration fabric.

i've got lots more strawberry fabrics i wanted to use in this quilt, but once i had a color scheme going, i had to take them out. i'm sure there will be more chances to use those other strawberries elsewhere at some point. i was surprised how many different colors there were in them because i thought they mostly involved red, white, green, and sometimes blue.

the quilt measures 52" x 64" and is composed of 8 rows of 13 - 4"x8" blocks, alternating pieced blocks with background fabric blocks.

the pattern is one of my own making which i call "cash and coins" because of the groupings of 2" strips, traditionally called "coins", and the 4"x8" background pieces that remind me of dollar bills (especially in this green), which is the "cash" portion. i first used this pattern when making collins quilt and thought it would be a nice setting for this fabric pull, too. it's such an obvious layout, making use of 2.5" cut strips (like a jelly roll), that i'm fairly certain it's been done before. but i've never seen it, so i've reinvented the wheel myself, i'm sure, and given it a name. at some point, when i use it again, i will work up a tutorial for it. 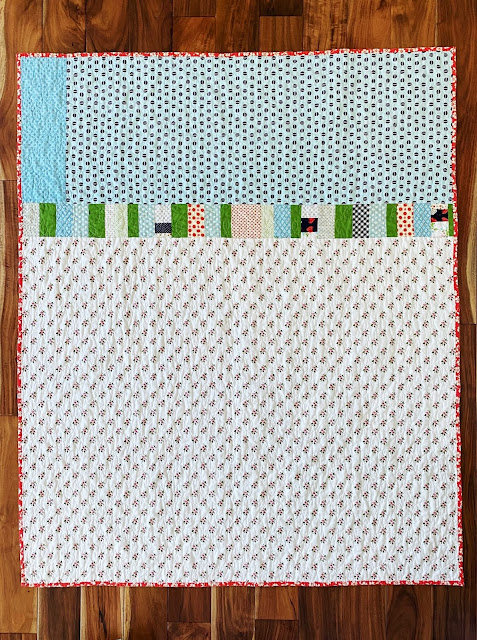 the backing is nicely structured and tidy, like the front. it makes use of extra coins and background fabric scraps for that strip. i had a large piece of a strawberry fabric that didn't look quite as expected when it arrived, which i used for the major portion of the back. the colors in the piece are slightly less bright and saturated than the quilt top fabrics, but i think it works fine. it was a good place to make use of a large piece of fabric i wasn't likely to use elsewhere, especially because it fits the theme of the quilt. 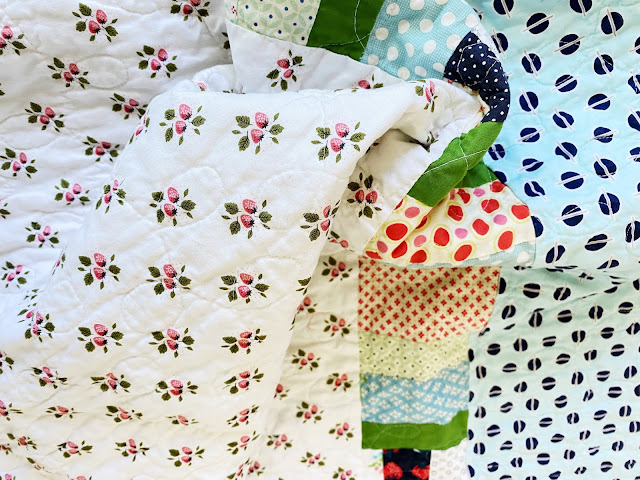 the rest of the backing is a strip pieced from two blue fabrics i used on the top. i like how it echoes the way i used blue and strawberry fabrics on the front. 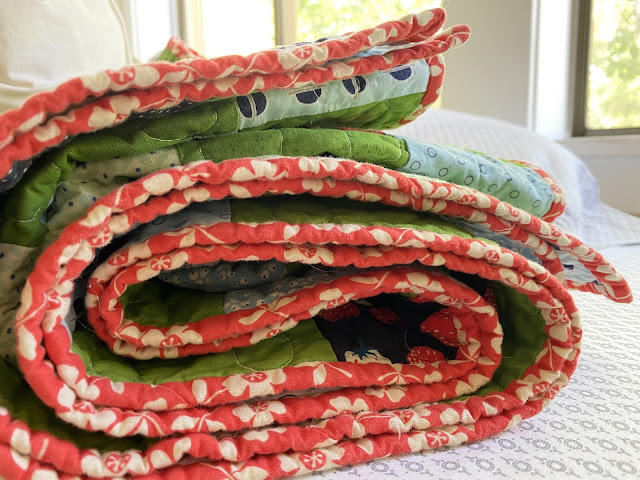 an element of the quilt i'm especially happy with is the binding! i used an old october afternoon two-toned floral print i've had stashed away for quite a while. it's not used in the coins, but it coordinates perfectly with the top and really sets off the edges with it's bold red color. it has the modern farmhouse feel of all the other fabrics. 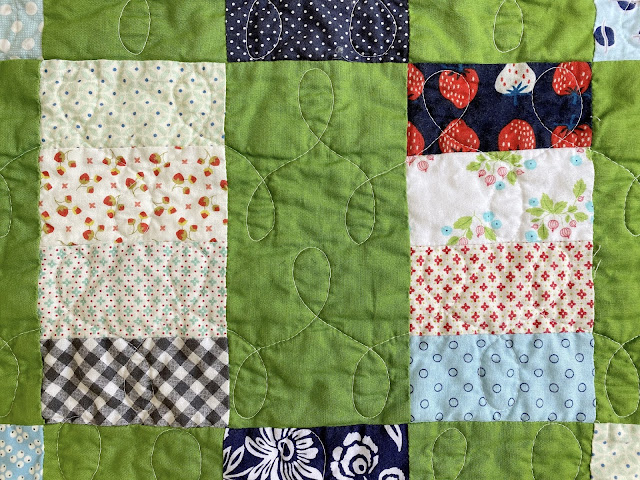 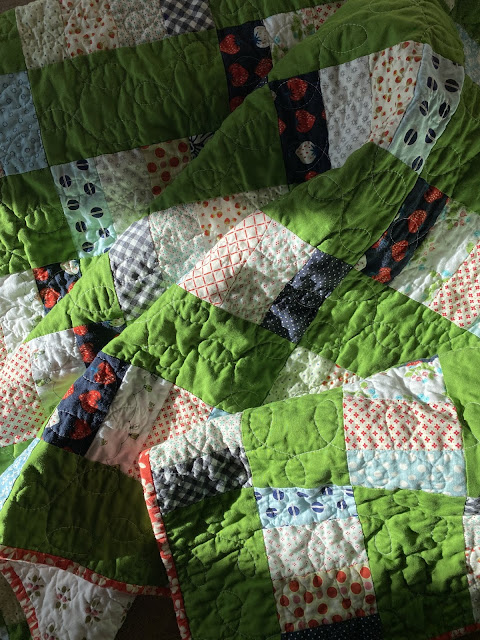 the quilting is a basic wishbone pattern, with the rows not interlocking as i sometimes do. it was super fast and easy and there was little marking the quilt because the coins already gave me a line grid to work with on the coin blocks. i can't even remember if i marked the green cash background blocks or not, but i think i did.
this quilt already has some nice crinkle because i've washed it three times. i've noticed with some of my older quilts that have been washed a few times the crinkle sticks around more after multiple washes. 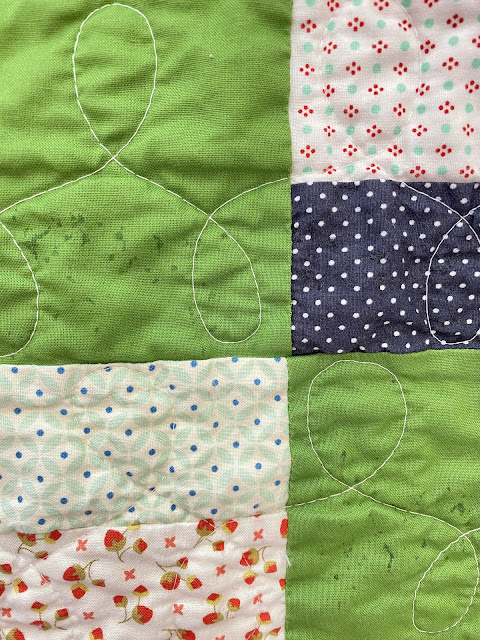 unfortunately, this one needed to be washed a few times up front because of a spray basting mishap. and unfortunately, washing didn't solve the issue.
i had a can of basting spray that i accidentally broke the nozzle off after just one or two uses. not wanting to waste the spray (it's not cheap), i tried putting the nozzle back on. i sprayed a couple of quilts in succession with it. i thought it worked - but i was wrong.
instead of coming out in a mist like normal, the spray was more like droplets. while it did hold the quilt sandwich together, it also made these obvious spots that are more visible on certain solid fabrics than on the others.
i was hopeful it would wash out once i completed the quilts because spray baste is supposed to wash out. and maybe it would have if i had gotten around to completing and washing them right away rather than letting them sit for months and months like i did. i've just decided this is a new design feature of this particular quilt - the green cash blocks are now speckled. 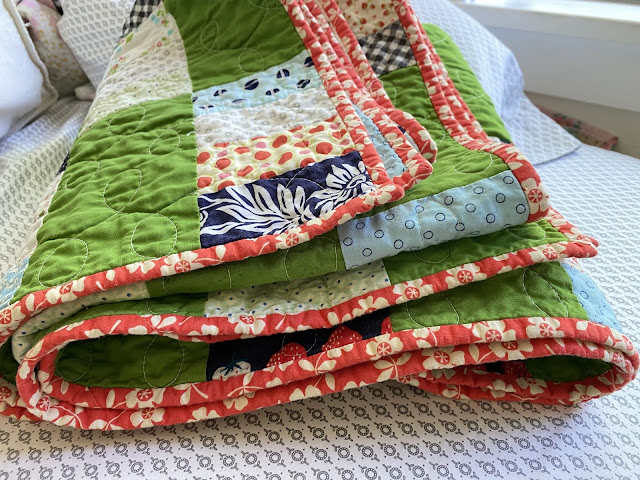 honestly, i don't even notice it most of the time and i use this quilt frequently when in our family room, where it now resides next to the couches, ready for a cuddle whenever anyone wants a lap quilt.
Posted by hydeeannsews at 11:10 AM

Email ThisBlogThis!Share to TwitterShare to FacebookShare to Pinterest
Labels: finish