piles that want to be quilts 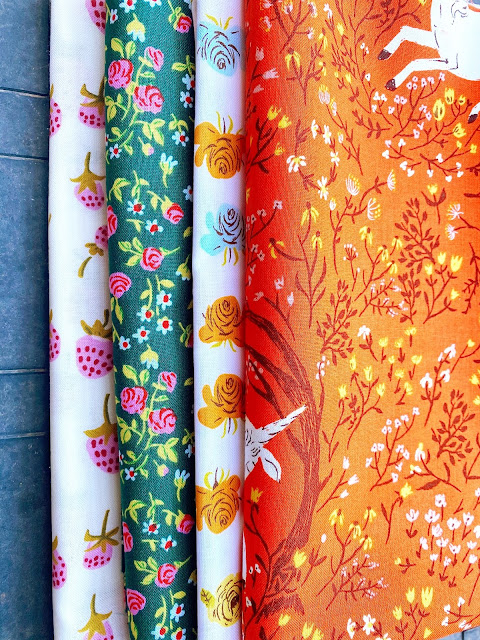 most often, my fabric pulls for a quilt are conscious and deliberate. sometimes they happen on their own when fabric is either stacked together by happenstance as i move items around my sewing room or when i purchase fabrics randomly that end up going nicely together. i can think of a few quilts in the last year that came about because a fabric pile spoke to me: fall paint lake and twelve south, for starters.
and now this one.
i'm not even certain of the origins of this pile of four pretty heather ross fabrics that were perched together on my pressing table, waiting to be put away. i think they were from an order i placed to handcut fabrics (sarah has lots of good picks, especially heather ross). however they got there, i began to notice when passing them that the two low-volume prints and the deep green and vibrant orange went very well together.
yesterday, i was working on a new liberty + chambray quilt that wasn't coming together nicely at all when i just gave up and cut into this stack instead. everything wants to be a log cabin lately, so i didn't argue and got to cutting some large hearth pieces (to showcase some of the unicorns) and 2.5" strips for the logs. 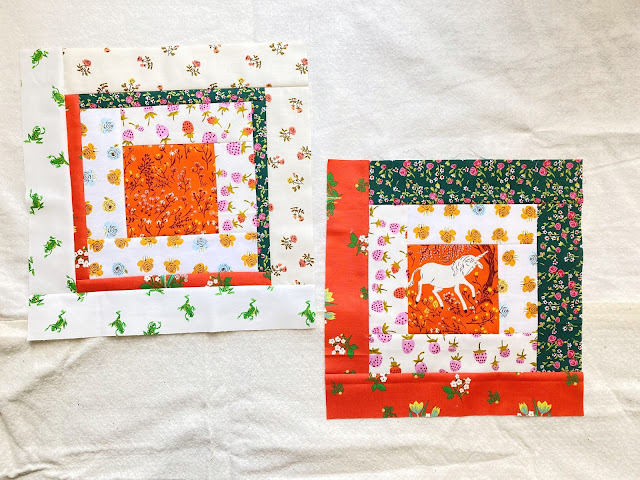 i wanted something to come together easily and quickly. log cabins are like that and make good use of standard cutting sizes, like 2.5" strips. i wasn't sure exactly how i wanted to use each of the fabrics, so i started with just wrapping the low-volume prints around the hearth. i did two of each print in succession, which i now realize is going to give me a secondary pattern to the layout, especially since i am pretty sure i did the deep colors in the same order on each block. we'll see how this turns out in the end. i plan on using sashing, so maybe it won't be too strong.
i quickly realized that i would probably need more fabric, especially because the orange fabric got gobbled up the way i was cutting for the unicorns. there probably wasn't going to be enough of it to use for all the blocks and i didn't want it to just be in the hearth.
i pulled two more low-volumes, two more oranges, and another green from my heather ross pile (and one rifle paper company that looks like a heather ross print). the new fabrics are so close to the original four that it carries the look exactly. (except maybe the frogs? i'm still a little unsure about them. but for some inexplicable reason i ordered a whole yard of them when 1/4 yard would have sufficed for stashing.)
after making 6 blocks with the first four fabric logs, i felt like the deep colors were coming on a bit strong. the block size was also a bit troublesome.
if i added another round of 4 fabrics, i was going to have some very large blocks and a bigger quilt than i wanted.
if i stopped where i was, they were too small.
i could add just another round of the other low-volumes, but didn't feel the colors would get enough play that way.
hmm.
i decided to trim the width of the color strips down to half, which would allow me to still use the trimmings for additional blocks. this subdued them some and gave me a better block size. i got 6 of them trimmed and the second round of strips started before i had to quit. i'm happy with the direction it's going now. 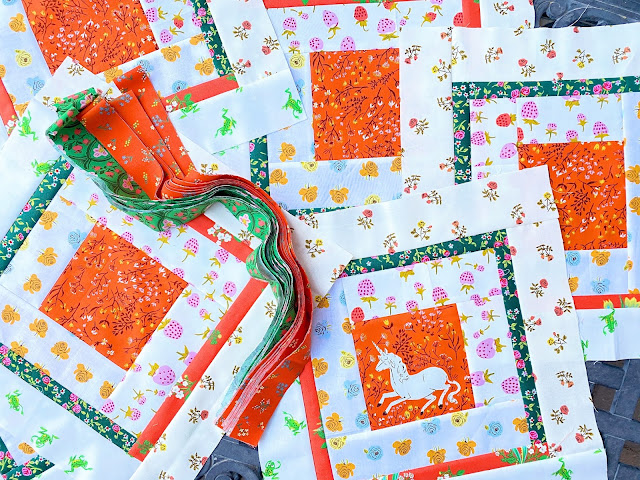 i only wish i knew where this color scheme fits or what it says to me. on the one hand, it reminds me of pumpkins. except for all the low-volumes. the orange and green should be sort of fall-ish, but it's not really very fall-ish. there are frogs, and berries, and flowers. maybe summery? except the orange doesn't say summer to me. i really don't know. not that it really matters. i'm sure it will find its fans and its season for rotation in the family room on its own.
Posted by hydeeannsews at 6:37 PM