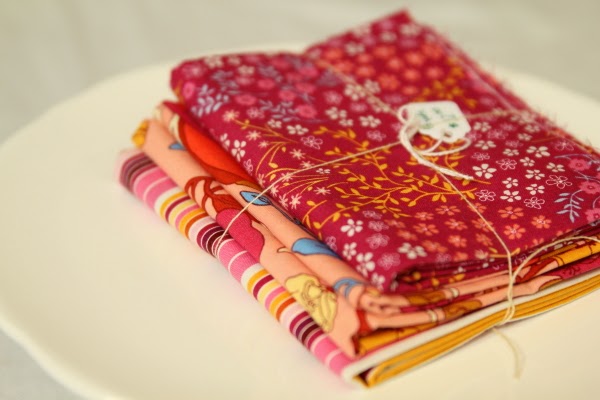 back in the spring, when i was still struggling with fabric fasting, i picked up this intriguing little half yard bundle off etsy while i was snatching up heather bailey prints. it seemed so vintage and bold in a color palette i wouldn't normally go for. but i have been looking at it and loving it ever since it arrived. after it came, i realized it was "the ladies' stitching club" from liesel gibson of oliver + s for moda fabrics. when that line came out, i thought i didn't like it but apparently i do. funny how that works - you see bits of a fabric range paired together in a unique setting and it actually does appeal to you. 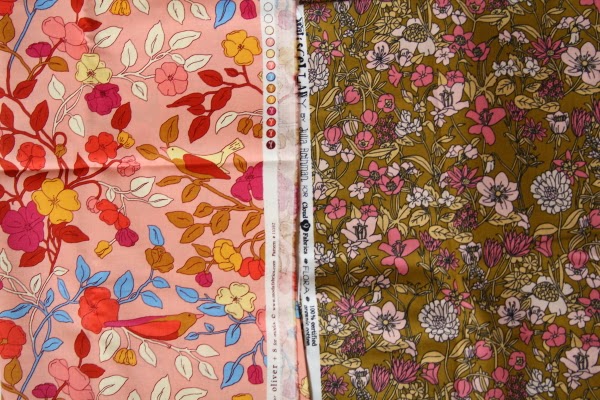 well, that bundle has been sitting atop my bawthroom sewing table being admired for months. sometime during the summer i broke it open and began to pull other fabrics that had similar colors to the shades of plum, pink, gold, peach, ochre, and a touch of blue, that were found in the large floral. i had also acquired another pink and ochre floral print (from "miscellany" by julia rothman for cloud 9 fabrics) that had a vintage, hand drawn vibe to it, which i wanted to use with the stack if possible. 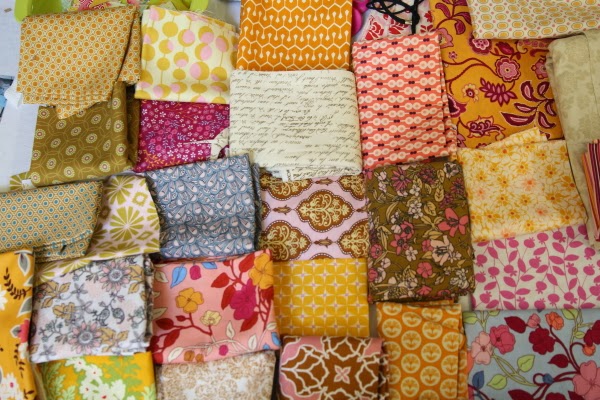 in the end, i got this pile together. it's rather unusual for me, a real departure from my normal palette. it feels like it's either going to be totally cool or a complete disaster. granted, the fabrics are not represented to the scale they will appear in the final quilt. i also think it needs a few more low-volumes and maybe another plum fabric or two to round everything out. but i do not want buy any fabric right now and since this is a longterm project, i can hold off on those for a while.

so what am i doing with this? and why have i started something new again? well, i'm currently taking the "angled" class with rachel hauser at stitched in color. the class has been going for several weeks and so far all i've done is read the material and drool over the photos. i want to make three of the quilts and am really excited to tackle triangles, diamonds, and flying geese! (not "dying geese", right deborah?) but i just don't have time to sew right now. and lately i've realized i mostly just want to finish off the projects i already have going, hopefully by the end of the year, and start fresh next year with new stuff. but, but, but i did want to participate in the class just a little and at least give the new skills and directions provided a try.

so yesterday i tackled triangles.

i'm starting with the "indian blanket" quilt using this radical palette i pulled. i already had one huge pile of fabric i'd amassed when i tried to participate in paula's triangle quilt along earlier this year, but i still want to do that quilt and didn't like that pull for "indian blanket," so i turned my attention to that pile on my sewing table which had yet to be assigned a pattern. i'm kind of excited and also very nervous about it. i'm taking a "well, we'll see how it goes!" approach to all of it. i'm just doing a row or two for some practice, then i'm going to set it aside and finish my boys' quilts. and that "bloom where you are planted" quilt i started on my birthday.

rachel provided directions for cutting using a standard 6" x 24" grid ruler. that was very helpful because it means you don't have to buy a special triangle ruler. but i already own one, so i opted to use that for my cutting. however, my ruler has a blunt tip and after doing all my cutting, i realized that blunt tip cut off 1/4" of the triangle so by following rachel's instructions, i had made my triangles 1/4" too high. darn it. trimming 1/4" off 28+ triangles seemed like too much work and too much room for error, so this particular row will have to just be 1/4" too high. now that i think of it, hopefully that doesn't throw off the placement of the triangles in the quilt too much. "well, we'll see how it goes!" right? 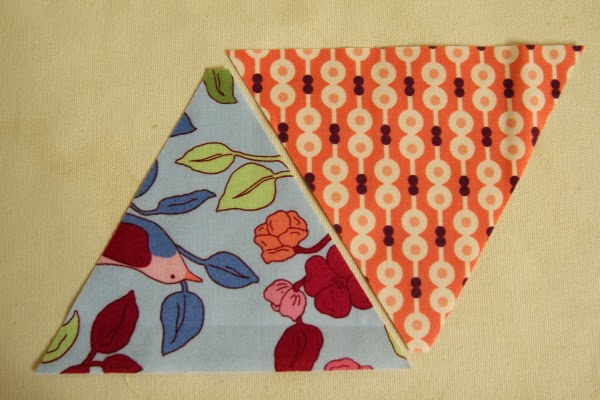 the blunt tips also threw off the alignment directions rachel had given, so i had to do a bit of trial and error (sewing all three seams on the first triangle) before i got it right. but here's what i discovered in case anyone else wants to know. if you want your on-grain edge (which is opposite the blunt tip if you cut with the blunt tip on the grain edge of your fabric piece) to be at the top or bottom of your row, line the two triangles up with the tips alternating along the top and bottom.

i know this is a really loud and bold pairing of fabrics but i've already decided that if i don't like it, i can always use it on the back! with the sizing mistake i made, i may have to. 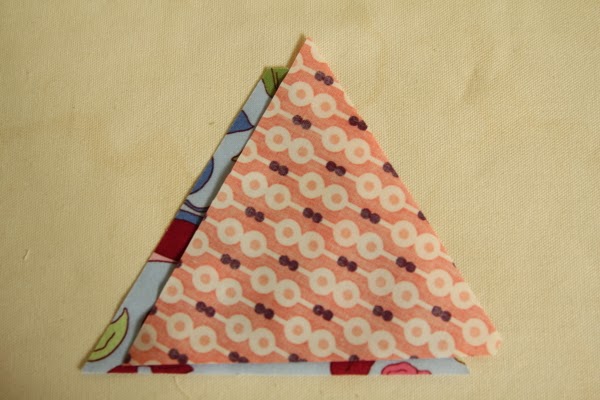 then fold the right triangle over the left one, keeping that middle edge where you'll sew the seam aligned along the diagonal. you can't just pick it up and place on top, you have to fold it over diagonally, which feels like you're folding the triangle down rather than over. 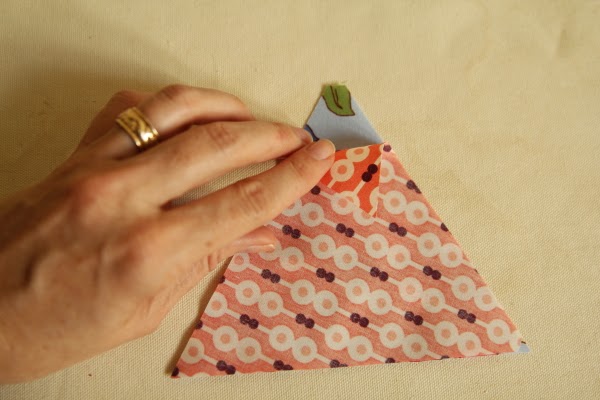 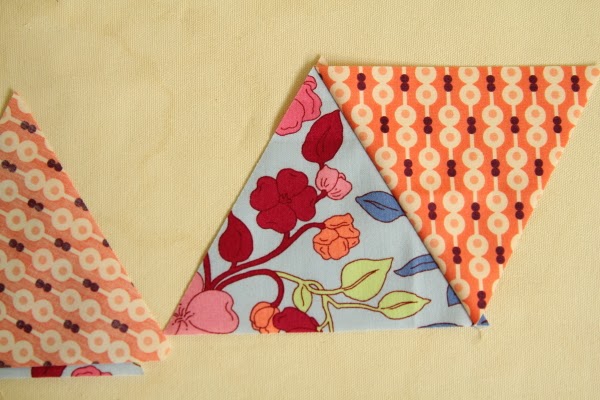 now sew down that seam. you'll be sewing the side opposite the two matched pointed tips, aka the side between the two blunt tips. 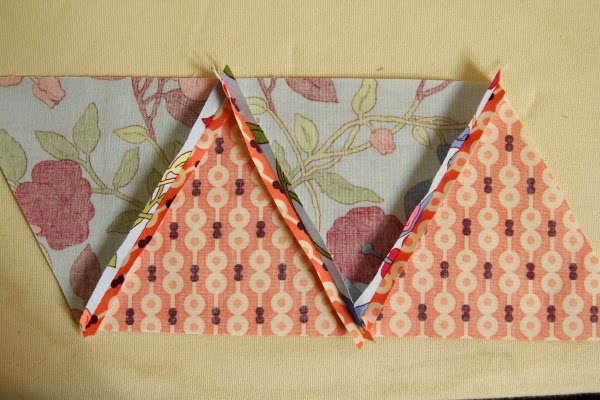 sew in pairs first, then start adjoining those, which is a whole different alignment issue! it took me no less than three tries to get this right the first time. not having all the dogears made it harder to follow rachel's instructions, but i got it in the end. 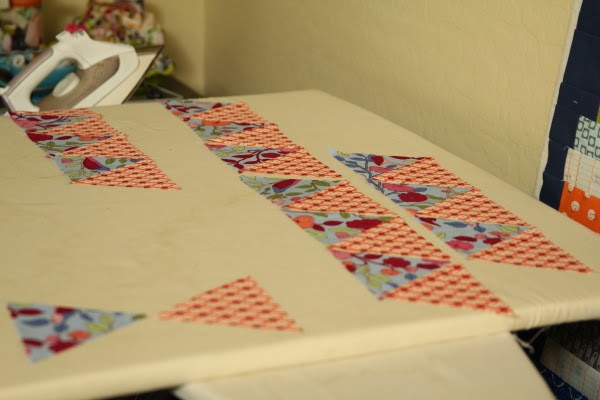 i have nearly a whole row complete now! i think i'll do one more so i can see how well my points turn out when i match everything up. wish me luck! then i'll be putting these triangles away and getting back to some straightline quilting.

linking up with lee's wip wednesday at freshly pieced.
Posted by hydeeannsews at 11:07 AM