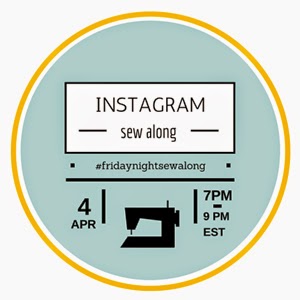 the lovely and brilliant sarah schraw of sarah quilts thought up this wonderful idea for any sewers at home on a riday night: why not sew together by sharing over instagram? yes, it's out now. i'm on instagram. but only because of liz. she's too busy to blog or email much anymore so i have to stalk her on instagram if i want to keep up any semblance of friendship. but i don't advertise that i'm there because 1) i definitely overgram, 2) i'm certainly not worth following 3) i don't want my usage of it to get out of hand so i have been laying low. but this is off topic. pretend you didn't hear anything.

back to friday night. on sew along night, people check in and post what they're doing periodically with the hashtag #fridaynightsewalong. the first one was last month. i wasn't sure how it was going to work or if it would feel like we were really sewing together but it did! it was really a lot of fun. also, i got more done during that time than when people are here in real time and i just chat my head off.

it went so well that sarah's promoting and participating the first friday of every month now. this past weekend was the second official friday night sew along, although people do use it any friday they want to.

so what did i do during friday night sew along? 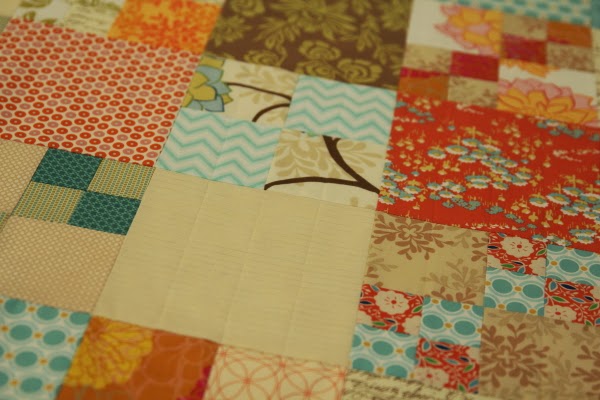 i spray basted "penny patch"! amazing, huh? it's a sandwich now. all stuck together and ready to quilt. i've had the top and backing laid out on the floor or hanging from the balcony railing ever since thanksgiving and was tired of moving it around every time a need arose. after i gave dogwood quilting a shot last week, i've been itching to get this penny up off the floor.

firstly, i spray basted using 505 instead of sullivan's this time. it went much better. less mess, less smell (almost completely none, actually), and it just went smoothly. i can see why people like it so much now. i'm not a total convert yet, but i did want to give the much-touted 505 a go. i chose to try it on this particular quilt because of the quilting pattern i was going to use. i couldn't think of an effective way to pin out of the way of the design so i tried the spray.

i did read in a book recently (quilting with a modern flair) that there is new research which indicated spray basting may shorten the life of the quilt, but that's all the book said. no reference, no reasoning, just the statement. unsubstantiated rumor, i call it, when nothing is cited. however, it has given me pause on the spray basting front once again. 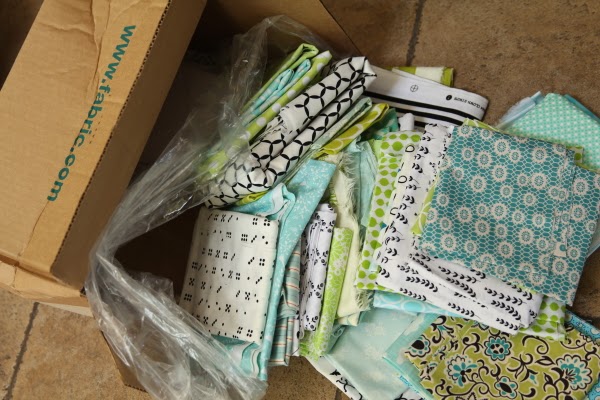 i had to run a child somewhere during my sewing time. when i came home, there was a package on the doorstep! a big, fat box of black-and-white, aqua, lime, mint, and turquoise prints from fabric.com. i was in love with a recent quilt made in these colors by rita of red pepper quilts, so i ordered a selection of half yards. sure wish they sold quarter yards, but they don't so twist my arm - i bought the half yards since that was the only option. actually, i love the color scheme of this quilt but prefer the layout of the one she made just before it in hsts, which included a corner in this palette.

a few people have asked me how i found this pull on the fabric.com website. it was pretty easy, actually. if you look at the menu bar on the lefthand sidebar of their home page, there is a "quilting fabric" link. click on that and several filter options will appear to help you find fabrics. i used the "color" filter to specify the colors i was looking for. i still had to scroll through dozens of options, but it helped a lot.

yes, this means i broke my fast in april. i'd already broken it for some liberty fabrics from queen bee fabrics and a stop at my local shop for a new baby quilt idea. i'm one of those illogical people who think, "well, i've already messed up, might as well go for broke while i'm at it." may is a new month and a reason to recommit. seems like i'm on an every-other-month schedule. that's improvement, to a degree. although when i was at the local shop, one of the gals at the counter, who happens to read my blog occasionally, called me out on it! hi, amy. linking in my honesty with rebecca lynne's april report. my downfall was ignoring all my own good advice about avoiding temptation.

again, i digress. after i'd opened my happy mail i got back to "penny patch". i had to decide how big to make the petals. i was tempted to go the size of the medium patches, which would have been soooooo fast. but not looked very good. so i started marking the grid for the small patch size. it took so much longer than i thought it would. it was killing me because i just wanted to knock out the darn quilting. then my baby brother and his wife called and asked if i wanted to meet them at the temple for the evening, so i dropped everything and ran. quilting was done for friday. 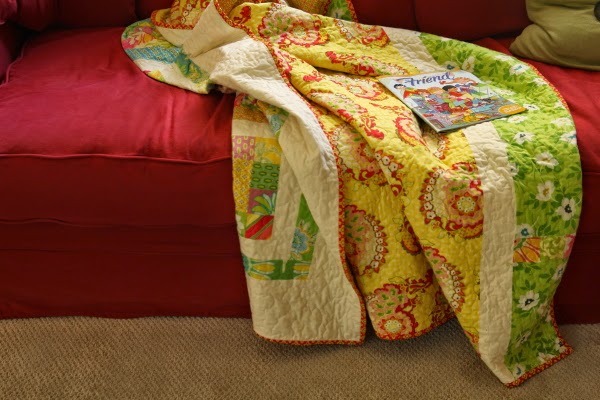 saturday i was going to get to that dogwood quilting but my oldest daughter was feeling poorly and asked me to hang out and watch a movie with her. she wanted some mama comfort. i was a little put out, but just switched gears and bound quilts while watching some bbc dickens adaptations all afternoon. and i actually finished "taite"! d2 hasn't even noticed it's done. she's been using it ever since christmas with the binding half done, anyway. jill and i are going to celebrate our 3 yr finishes with with a proper photoshoot later this week, so i'll share the real finish photos after that.

that sums up my weekend sewing. hope y'all had a happy weekend, too!
linking up with lee's wip wednesday at freshly pieced.
Posted by hydeeannsews at 3:16 PM