gypsy child of the hst block

gypsy wife calls for two 8.5" hst blocks that consist of 16 - 2.5" hst component pieces in a 4 x 4 layout. its very simple and straight forward. i'd seen blocks that used uniform fabric through out, and blocks that were completely scrappy. i was leaning toward using some sort of unifying fabric or layout concept, like placement of light and dark fabrics, a monochromatic color scheme, or one feature fabric for half the triangles, so the block would look like one cohesive block rather than just a collection of mini hsts in a segment of the quilt.

i had several hst units in the correct size that were leftover bits from earlier block making for this quilt. i decided that for at least the first hst block i would go completely scrappy within a certain color palette that all my units already happened to fall within: light yellow, pink, turquoise, pale green, candy apple red. actually, i really wanted to keep it pastel, but one of the blue flea market fancy pieces was predominantly showing the red flower in the print, so i added that red to the scheme. i'm so glad i did because i feel the red gives it some depth and balances the lighter colors nicely.

the block came together in no time, really. 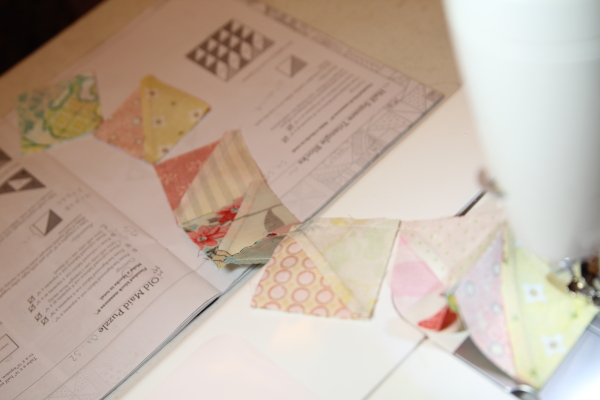 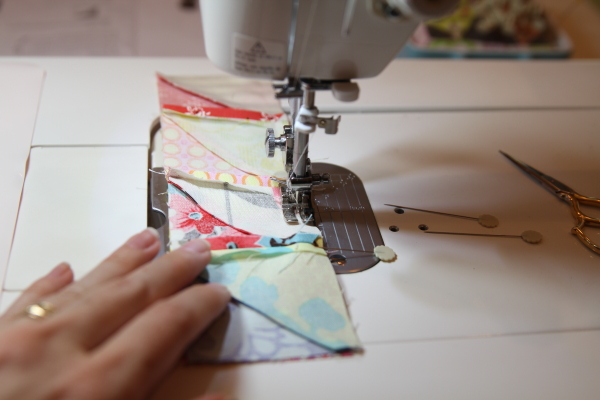 now, because i'm focusing on improving my precision for this project, i also did the following along the way:


again, a scant 1/4" seam was helpful. i trimmed my component units to 2.5" each with my little ruler, so i know my unit size was spot on. if my block was coming out a bit shy, it was because i wasn't sewing a consistently scant seam. i've found this to be key with all the sewing on my gypsy wife project. master that scant seam!

also, i wanted my seams to match up across the rows, so i pinned at the three seam intersections.

when doing a simple block like this, it's easy to take the time to do all the little extras i might not normally focus on in a bigger project.

so here's the fun news:
i liked the results of my first block so much that i began envisioning an entire lap quilt made of hsts in this color palette! as i admired my pretty little block, i just wanted to multiply it and expand it into something larger. 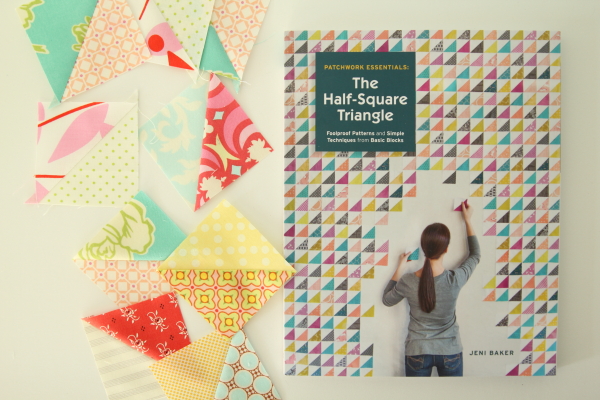 i've just been reading jeni baker's hst handbook, the half-square triangle: foolproof patterns and simple techniques, which probably further influenced my desire to work with the hst. jeni's book covers several concepts to explore with the hst but i was hankering to just do a whole entire quilt in a very basic layout. color palette was going to be the primary concept i would work from within that simple shape. no fancy layouts, just plain hsts in a pleasing range of hues. 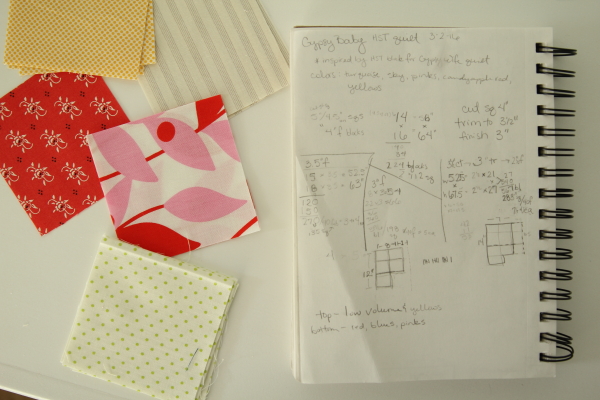 the gypsy wife's 2.5"uf/2"f hsts were a bit too tiny for a whole quilt, but i also knew if i changed the size of them too much, i'd be altering the scale of the fabrics and their look in the full quilt. i played around with the math and decided on 3"un/2.5"f hsts instead. not much of a difference, but different enough.

and i reigned in my desire to make a large quilt. lately i find myself making patterns just a bit larger so they tend to fall more into the twin-size bed quilt range rather than a lap quilt. i always think, "well, it's almost big enough to cover a bed, why not just make it that much bigger so it can be used on a bed, too."  or i worry that a throw quilt won't be sufficient cover for snuggling on the couch, even though they always are. but since i didn't want to commit to too many hsts, i scaled back to a true throw/lap size.

that's a whole lot of hsts! but i'm feeling up for the task. there is something satisfying about basic patchwork and the simplicity and rhythm of a basic patchwork quilt. it balances out the more complex designs and projects i'm working on. and i've reconciled myself to trimming each of those units. it doesn't take that long (although multiplied by 568 it's a lot) but it does make a difference. trimming is another of those tasks that used to drive me crazy and feel like a waste of time, but that i've come to accept and appreciate. so trimming it is. this will be a project i can work on in bits and pieces between others. making a batch of hsts here and there will break up my more intense projects or be something quick to do when time is limited.

like i mentioned, i'm working in a color palette as my main concept: light yellow, pink, turquoise, pale green, candy apple red. value is also playing a role in that i'll be using the lighter prints on the left side of the hst and the more intense prints on the right. 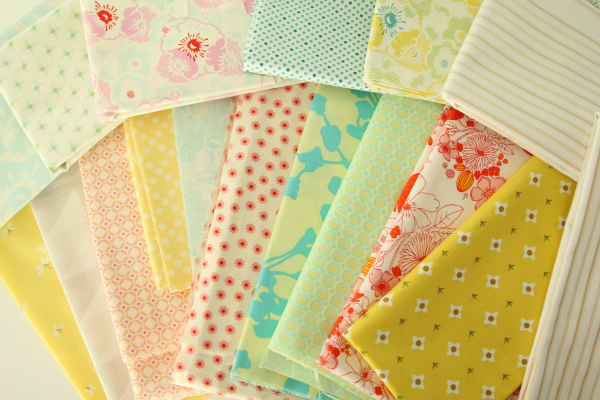 the upper/left triangles will be mostly yellows, the softest blues and pinks, and some neutral low-volumes. 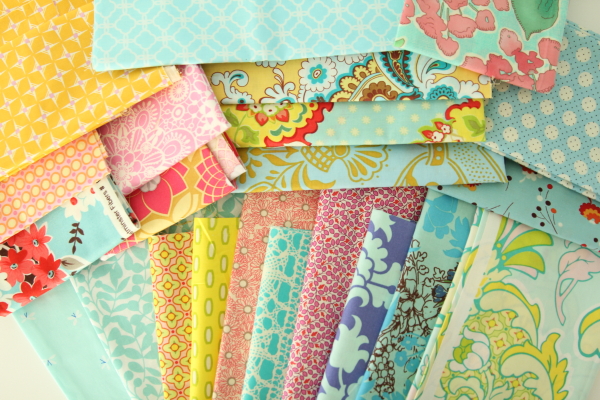 the lower/right triangles will be these brighter blues, pinks, bits of red, and a few intense yellows.

that's the plan!
my gypsy wife is having a baby. that's how i think of it, anyway, since the one block from the first project has inspired a whole new quilt. projects beget projects sometimes.
Posted by hydeeannsews at 8:53 AM