i debated about whether to post this or not, but obviously decided "yes." so here goes . . . 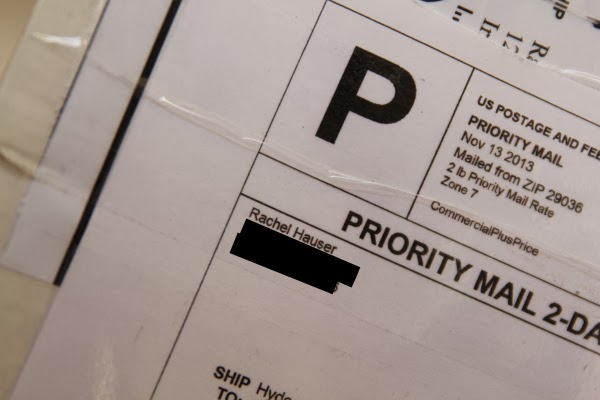 a certain special fabric package arrived at our house last week. a package i was super excited about. only this package didn't contain cut fabric, it was an already completed quilt. in case anyone wondered where lolly lolly went after it left rachel's header banner at stitched in color last week, now you know. 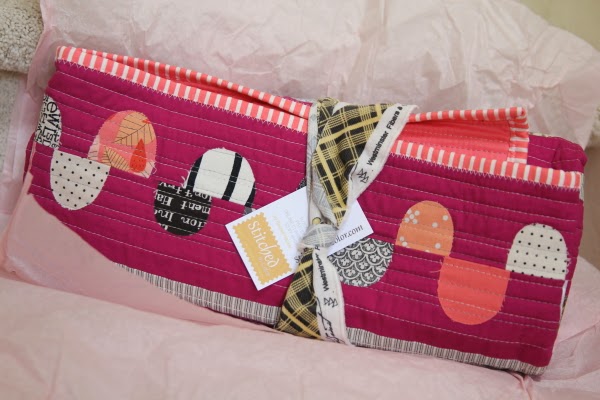 i have been in love with this quilt ever since i first saw it on rachel's blog. this was rather odd for me because of the color choice. i don't do magenta or anything purple-y. not at all. but apparently i do. the color combo of the cerise and melon (what rachel calls that magenta & orange-y pink) is totally surprising. and enchanting. i keep looking at it thinking, "I can't believe this works . . . but it does! wow!"

other things that attracted me to this quilt: the story of the emotional roller coaster rachel went through in making it, the original pattern from one of my favorite books ("gumdrops" in sunday morning quilts), the way rachel adapted that pattern, all those adorable fabric scraps, the dense line quilting, the fact that rachel made it. um, basically everything. every time i visited her blog, it made me smile to see it on her header banner. and with penny patch under way around here and my obsession with figuring out vintage tangerine, i was seeing that lolly lolly a lot.

then last week i stopped in at stitched in color to link up with the penny patch quilt along link party. low and behold, there on her sidebar was lolly lolly for actual sale in her etsy shop. that blew my mind! i thought, "i didn't know she was selling this. how did i miss that? and i can NOT believe it's still up for grabs!" now, i'm a quilter. and i'd already planned on making a quilt like this eventually, probably in colors that i considered more me. but i went a little crazy. the idea of having the exact quilt, made by rachel herself, in my own hands was irresistible. so there went a chunk of my fabric budget which had been rebuilding as i tried to fabric diet.

apparently Rachel had just listed it the night before and was pleased to have it snatched up so quickly. happiness on both sides of the deal. she asked what my plans for it were. that had me a bit stumped because of it's size. it's actually only a large baby quilt - 39" x 42". larger, it would have been perfect as a gift to d4 for Christmas instead of the pillow sham i was planning. (cheating, yes. but, hey, someones mother made it.) i was definitely not giving it away, so where to put it? 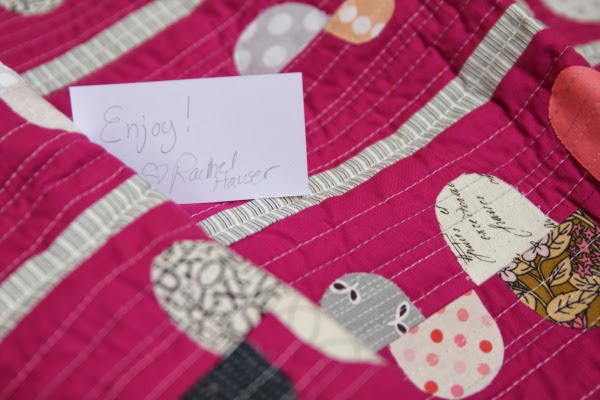 i ordered this quilt on tuesday and it was in my hands before the week was out. fast! rachel also wrapped it nicely in some pink tissue and tied it with selvage from some shelbourne falls corduroy. (that stuff is incredibly soft, by the way!) there was even a business card with her autograph on the back. okay, autograph is a bit strong but i'm kind of a rachel geek lately. it's probably coming across kinda creepy. there is no serious stalking going on. promise.

i was rather busy after i opened the package, so i tucked the card in my back pocket to avoid loosing it. later in the day when i was working on my penny patch, it felt a little like a good luck charm back there. that card is going in my scrapbook because i'm the type to keep bits like that.

none of the kids were home so i tried an experiment with the quilt. i'd decided to place it on the toy balcony upstairs for them to use when they played. instead of making a huge deal out of the quilt, i simply hung it in place and waited to see their reactions.

all the girls noticed it in turn and made very appreciative, excited, and complimentary comments about it. d3, the 7 yr old, was the most smitten. she just sat in front of it, stroking it, admiring it, and talking to me about it. 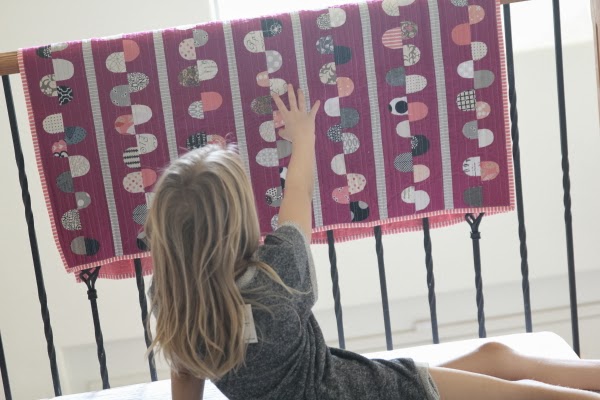 "mom, where did this easter egg quilt come from?"
what easter quilt? what are you talking about?

"this purple one with all the easter eggs on it. did you make it?"
oh! those are actually kind of supposed to be gumdrops, not easter eggs. it's called the "gumdrop" pattern from a book i like.  no, i didn't make it. rachel hauser made it. i bought it from her.

"oh! who's that? do you know her?"
no, but i read her blog all the time. i really like that quilt so i bought it when i saw she was selling it. i was just going to make one, but i bought it instead."

"well, i really love all the gumdrops on it. it's so pretty. i like all the different fabrics she used."

"mom, can this quilt be mine? i want to keep it on my bed and snuggle it a lot."
the quilt is a little too small for you. you already have a small quilt on your bed. i just want it there on the balcony for everyone to play with.

"well, okay. but can you make me a larger version of this exact quilt? because i love it. you better expect me to be playing with it a whole bunch." 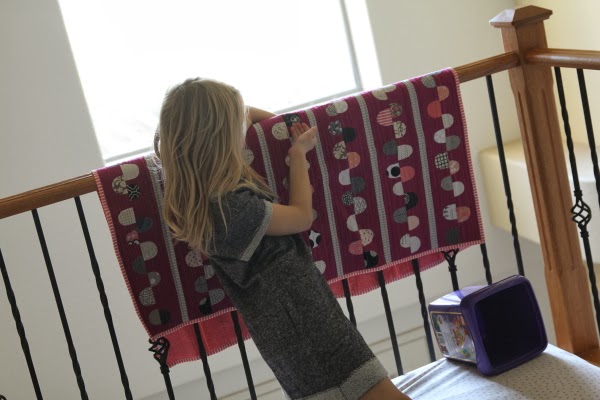 and so am i.
this quilt has done something to me. it's got me wanting to do new and surprising things with my quilting, things i've never dared or even desired to do. it's pushing the limits of my creative thinking. i expect my quilting to be different soon.

from the bottom of our hearts, thank you, rachel.
i know i paid for this quilt, but i feel like i won the lottery.
lolly lolly is home and we are over the moon about her.
Posted by hydeeannsews at 5:06 PM