last saturday, i continued working my way through my christmas list. once I had "twirly" basted, I rewarded myself with my selfish, i'm-dying-to-do-this project: my penny patch quilt. 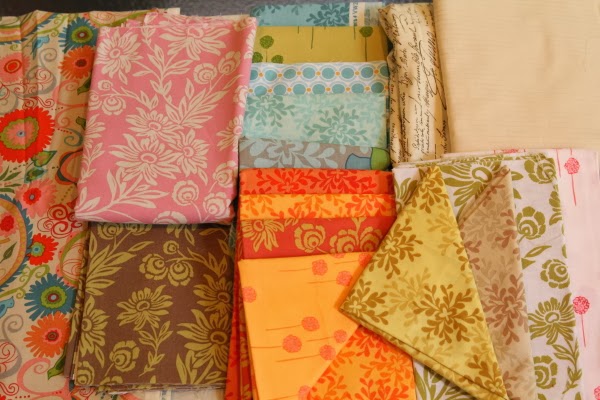 this stack of fabric was purchased during my very first quilt class, back when my stash was limited to one tiny portion of one shelf. I never got around to making that quilt, but I still liked the pull. it's perfect for a penny patch, I think. it's a mix of joel dewberry's modern meadow and valorie wells' nest, with a script print and that awesome aged notebook paper print in the upper right corner. fortunately, it fit pretty well with Rachel's color recipe with only a few tweaks.

the loud, obnoxious, totally cool retro floral on the left is my backing. moving right, the pink is my "pop" color C, the brown & green floral is my darker neutral color N. right again, the greens & blues are my dominant color B, the oranges my second dominant color A. and those are the low-volumes on the farthest right.

I began cutting on Saturday evening. I must say I should have read through the cutting directions a bit better. and I actually thought I had pretty well. but Rachel wrote them very distinctly for a beginner and I kind of skimmed them enough to get a feel for what was needed. she did say her different cutting plans yielded more than was needed for the quilt, but I didn't grasp that fully until I cut half the fabrics and started laying them out on the design wall in groups and matching up the quantities I had with the total cuts called for. so I ended up with a lot more cut than needed. i'm thinking I might turn it into a baby quilt at some point. 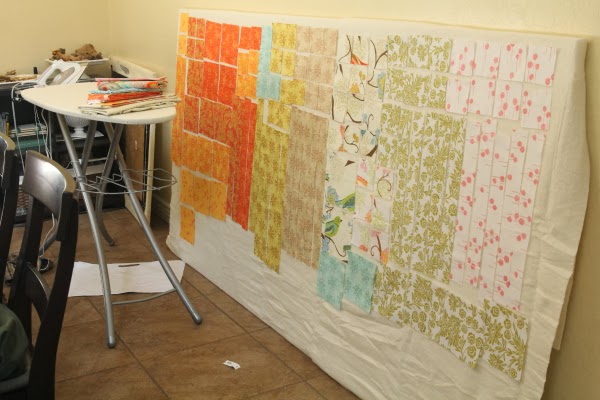 oh, did you notice i said "design wall"? yes, I did. I broke open that batting and draped it over the foam insulation board. voila! functional yet oddly sized/shaped design wall. the mr will be so excited when he sees the latest addition to the dining room. I think i'm actually going to get another full 4'x8'﻿ board. I need to refer to the directions Elizabeth Hartman gave in the craftsy class again because she did say how to make it modular/portable/storable. anywho, it's been nice to have so far. i may change my tune when the baby discovers it.
after i ceased cutting for the evening, i went upstairs to look over the directions on the computer instead of my little phone screen i had been using where i was cutting. while on the computer, i noticed that stash photo i took of some purchases for baby boy quilts and a few other bits. 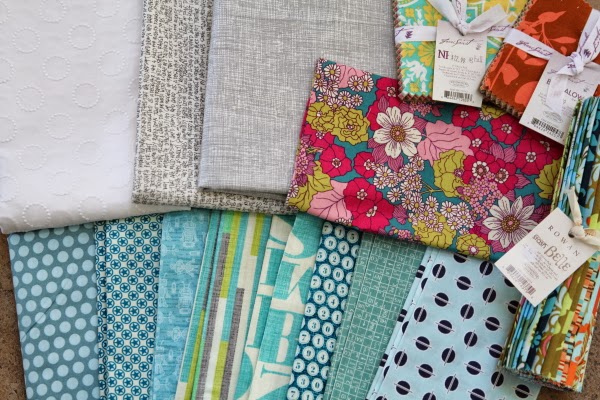 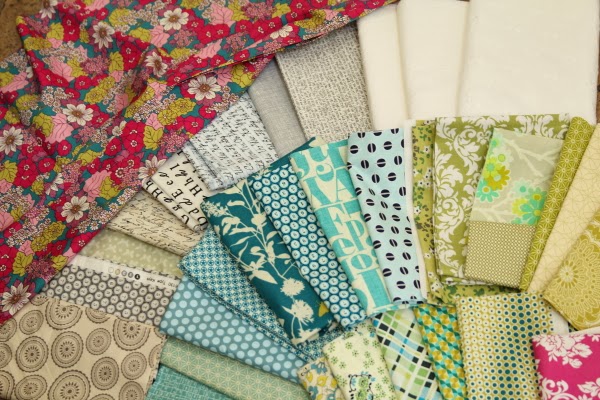 so Monday morning the baby and i swung by my lqs (which is on the other side of town) and turned those bits from the top photo into the new photo below by adding some 1/4yd cuts to round out my idea. (however, now that i'm looking at it, i'm having one of my weird "hey, where did those upstart fabrics come from to crash the party?" moments because i like the saturation of the blues in the top photo.) those whites glowing at the top are 3 different closed eyelets, fyi.
any guesses what i'm going to do with this?
linking up to needle and thread Thursday at my quilt infatuation and Thursday threads at 627 handworks.
Posted by hydeeannsews at 3:21 AM