i am certifiably insane.
really, i am.
loads of projects lined up at home, two nearly finished.
and what do i do?
i pick another completely new project not even slated on the books yet.
insane. 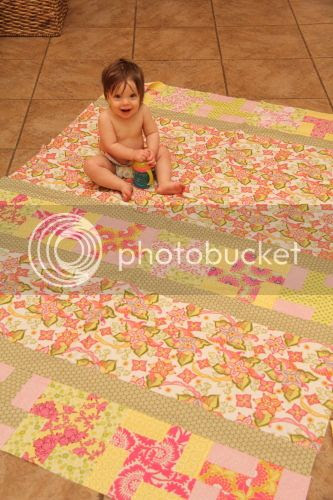 well, i signed up for this one day class at ETC with the hopes of having a fun day out, getting a quick project completed, and digging into my stash at home to use for it. sounded like a great combo. but when i got the pattern for the quilt a few days before class, i realized it wasn't pre-cut friendly like i thought. it looked like it should use either charm squares (which i have aplenty) or jelly roll strips and a few large blocks of fabric. this, however, was not the case once i got the supply list. ugh. i didn't want to buy more fabric, really i didn't. there weren't even any i had my eye on at the store. but the idea of sorting through my stash for the needed items was too daunting and time consuming. so while at bucks day, i scrounged around and found some fabrics i liked. i did have a 20% off coupon for the whole purchase, so i got a little break. 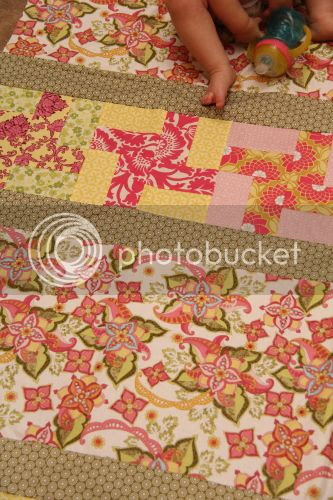 i picked some riley blakes from "songbird" and "bohemian festival" lines and some joel dewberry from "heirloom", all with strong hot pink, yellow/gold, and forest and lime green. a few small touches of turquoise, too. it was a pretty pile of fabric. and i was rather pleased with my cross-line color matching. with so many fantastic lines already coordinated, i rarely branch out and mix them up much.

but my simple idea continued to get more complicated and consume more than i intended. looking at the pattern size and sample, i decided it wasn't quite big enough, so i did the math to enlarge it. really, i didn't need another crib size quilt, but daughter #3 had been complaining that "star cookie" was getting too small for her. i thought this was a great opportunity to get her a larger quilt. all i had to do was add a spinner or two to the rows to widen it and increase the two large panels a few inches to add some height. easy.

i was even a good girl and precut all the strips needed the night before class so i could knock out as much of the quilt as possible during the workshop time. i am finding that with the added practice, my cutting is getting much more accurate. it's a miracle! never thought i'd see that happen.

but by the day before class, there were more complications afoot at home: i had some really sick kids and seemed to be coming down with something myself. i debated skipping the class, but it was too late for a refund so i was going to loose the class fee and then i'd be stuck with a load of fabric i'd likely never get around to using. so i went anyway.

i took a couple advil, packed food and gatorades, and hammered my way through that quilt as fast as ever i could. i avoided shopping and chatting as much as possible. i got a bit reckless as i went along, but everything went together quite well. i utilized chain piecing for the blocks and only had to redo two - my only mistakes all day. that is another miracle! experience really is starting to pay off and improve my skills. even my seams are more accurate.

once i got everything laid out, however, i didn't like the look of the quilt much. it was way too busy and hurting my eyes to look at. maybe that was the flu coming on, but i didn't think so. i decided to add in those green sashing strips to break up the busyness and add some breathing room. it also increased the size of the quilt some more.

class time was almost over as i started sewing all the major pieces together. that's when i discovered a big problem: the large fabric panels had been cut 1/2" too short. the teacher was helping me figure out how to squeeze the cuts out of my 1.5 yards of fabric and either she cut it short or i cut some off somehow. i'm not sure who did it. regardless, it was short. a lot. normally that's easy to fix by cutting everything down a bit, but the only thing to do in this case was shorten the outer blocks by 1/2" which would be noticeable and ruin their square shape.

having made the top so much larger, i had to buy more fabric for the backing. i got the same pattern as the large fabric blocks, so i think i will unpick them and recut to the right size. the thought of that makes me sick, but i think in the long run i will be happiest that way.

i finished putting all the major pieces together, nearly completing the top. at that point, my advil had worn off and the illness kicked in earnestly. i could barely see straight. what a day!

in reality, i've never done a project so quickly. i tried stack cutting and made good use of chain piecing, too. but i left with an incomplete quilt, much less finished top. it was pretty depressing.

and i'm not even sure i like it that much.
i have no idea what to call it.
(maybe "spinning out of control"?)
like i said, totally insane.
completely.
Posted by hydeeannsews at 9:03 PM