wip and a garden's back paths 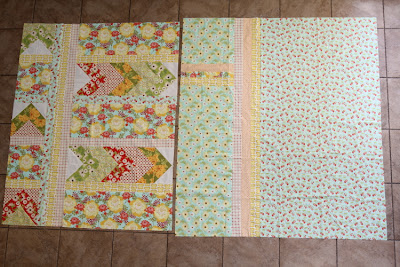 it's not wip wednesday, but i didn't complete anything new before wednesday, so wip comes on friday this week. on thursday, after getting a few morning necessities done with the kids, i bundled myself off to sew at ETC's open lab. in the four hours i was there, i managed to complete my back for "garden path," which is what i think i will call this one since it's so garden-y and looks like paths and directions in the design. "romance in the garden" is a bit too long. 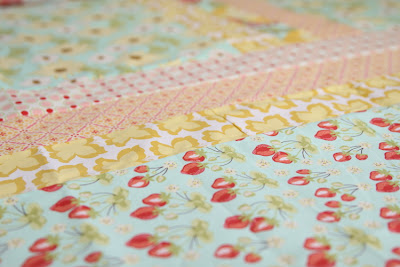 anywho, the back is done now. taking almost 4 hours to complete was a bit irksome for such a simple-looking item, but there was a lot, a lot, a lot of pressing involved with those huge pieces of fabric and then some tricky cutting to get them squared. for some reason, the strawberry piece was super wrinkled (and is still rather, even after all the pressing).

originally, i planned on using the same 3 sashing strips from the front when piecing the two large aqua floral sections together, but then i realized one of the strips was the same as one of the large blocks (the strawberry). looking at the limited amount of choices i happened to have with me in the project box, i picked the snowflake print as a sashing instead. 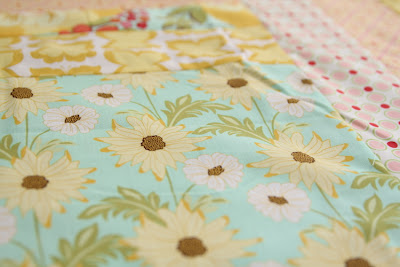 my next improv came when i realized the strip of daisy fabric was 1/4" shorter than the quilt front, not leaving any room for shifting or slight shrinking when quilting the darn thing. maybe it would have been okay, but since the top has no outer border with the design carrying right up to the edge, i really needed the extra few inches. i did not want to have to shorten either the top or bottom if the back did come out smaller after quilting. so i decided to add three more strips of sashing in to lengthen the daisy panel.

once again, my choices were limited to what i had on hand. and i was running out of patience, wanting to be done. i just rummaged through the cut strips i already had. i used two of the prints from the vertical sashings: snowflake and butterfly. fortunately, the butterfly strip was cut on the correct horizontal orientation. unfortunately, it was going to be slightly short. so i pieced on a few inches to be safe. again, unfortunately, i added the piece to the wrong side. i put it on the right, where it is more obvious rather than on the left, where it would have been either swallowed up in the binding or virtually invisible. oh, well. another lesson learned, i guess. 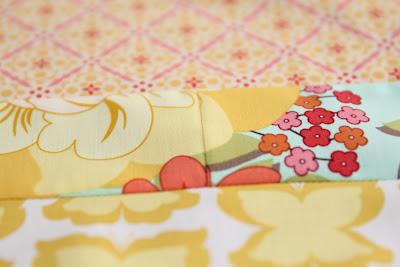 i had a few bits of the large rose floral from the front that i wanted to incorporate. they were not as wide as the other sashings were, but i didn't care. i had to piece again and am pretty pleased with how closely i made the print match up (see above). i got it almost exactly dead on the very first time with only a little sloppy guess work!

in general, this quilt has been very fun to work on. and looking at the top right now, i have some ideas brewing for a similar but altered design of my own. those big 1/2 triangle chevrons were pretty easy to do. i happen to have a large stash of fabric that needs to be worked through, too.

internet purchases: painful to admit, but i did buy some stuff!
quilted castle - some jennifer paganelli for upcoming class next month; stocked up on what's left of my favorite meadowsweet before it's gone; some EOB clearance of it's a hoot, ecole, odyssea, wonderland; and broke down and purchased sale stock of northcote range, jelly and backing.
fabric.com - some clearance jennifer paganelli (for that class) and amy butler i couldn't resist.

trips to the store:
purl soho while i was in NYC two weeks ago
one visit to ETC, just for open lab. no purchases!
Posted by hydeeannsews at 12:26 PM