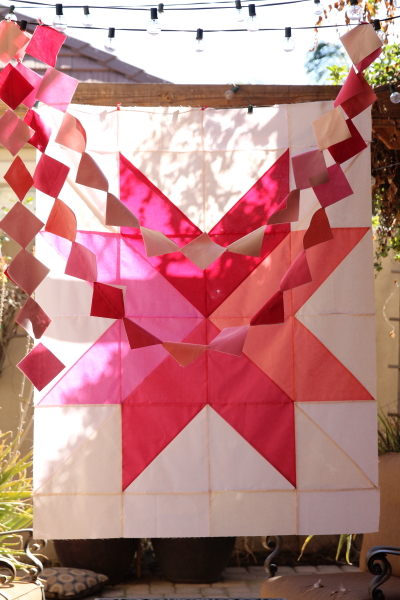 i've got a few photos and thoughts to share of the progress on my love all around quilt. i'm sticking to the same basic formula i used on the star of the circus quilt: large center sawtooth star composed of 12" blocks, 6" neutral background border on all 4 sides, 6" colored border on upper and lower end, 60" x 72" quilt.

obviously, i chose a different number of colors and color layout for this center star, which gives it a different look and feel. i'm always intrigued by the way small changes like this affect the overall look of any given pattern. before, i had a star with a pinwheel center. now i have a star composed of four hearts.

next, i had to decide on the border treatment. before, i used 6" hsts with specific placement of the light and dark colors to give sort of a wide triangle effect to the border. this time, i wanted to try something different. initially, i was leaning toward using the same shapes i use for the background border (6" corner sqs and 6"x12" rectangles) in the heart colors. it would have been the fastest and simplest way to go. but i decided to echo the heart shapes from the center. this meant i would be varying the pattern slightly, since the heart shapes were composed of 4 hsts, not too. i decided the effect would be worth breaking out of the formula a bit. 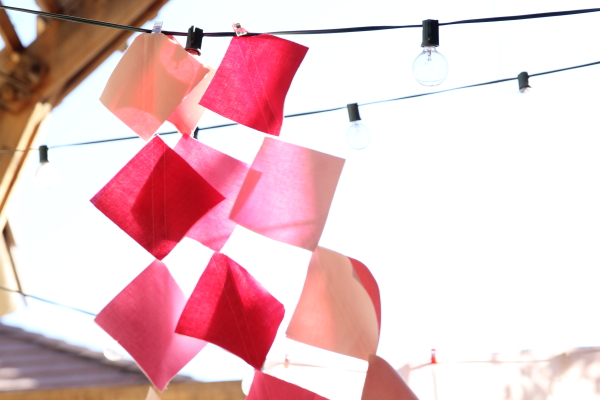 i'm still getting a kick out of the way chain piecing resembles bunting or a swag every time it comes off the machine in one long string of shapes. and i still want to photograph it every time. 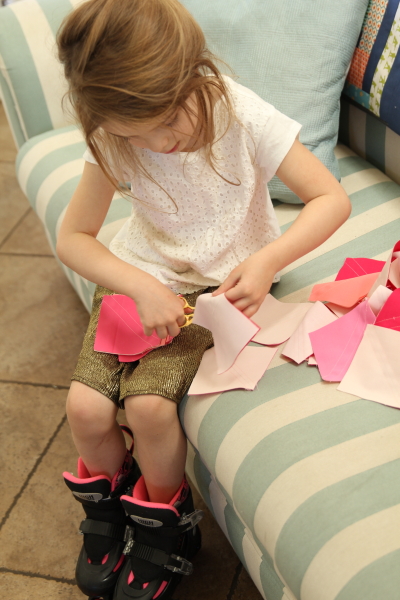 this little lady likes to snip things, so i set her to work on the chain piecing. she was in the middle of practicing her rollerblading (christmas present) on all the tile in our downstairs, but she stopped and snipped for me. 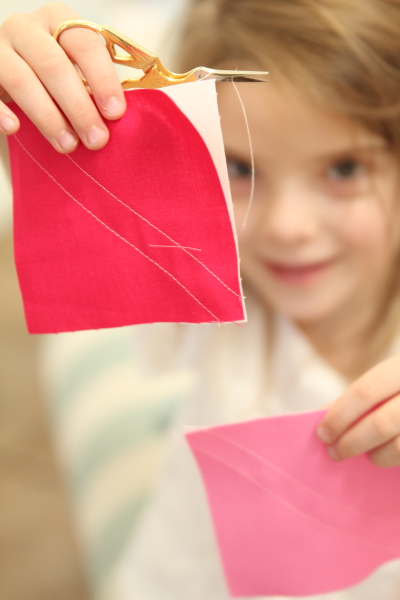 i love finding little jobs like this to involve the kids in the process of my quiltmaking. it adds to the story of the quilt. they'll be able to look at it and say, "i helped with that one!" also, it exposes them to the process and teaches them some of the skills involved. i like weaving these things into their childhood memories while passing on the skills. 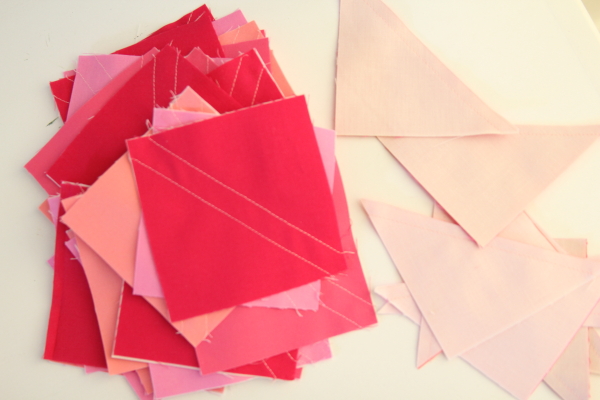 the hst  is the story of my quilt life these days. i hope this means i'm getting better at them. 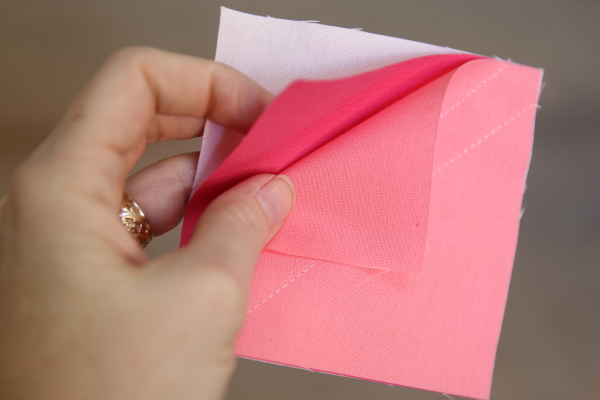 although this little batch might attest otherwise. i found a whole new mistake to make: 3 squares pieced together instead of 2. how did that happen? i suspect because kona cottons are slightly thinner than other quilting cottons i've been working with, so i didn't notice that i'd grabbed 2.

and since i cut the light background squares and the colored squares from different size pieces of cloth, i miscalculated the number of light squares i'd cut by 2. hence, the two piles came out even when i layered 3 squares, not once but twice! nothing seemed amiss until i cut through the first set and was amazed to see two colors there. then i had to try to figure out where the 2 missing light squares were. some pondering over my math and cutting configurations eventually brought me round to the correct conclusions. i am no computer, but i usually figure it out in the end, after taking the long way round. 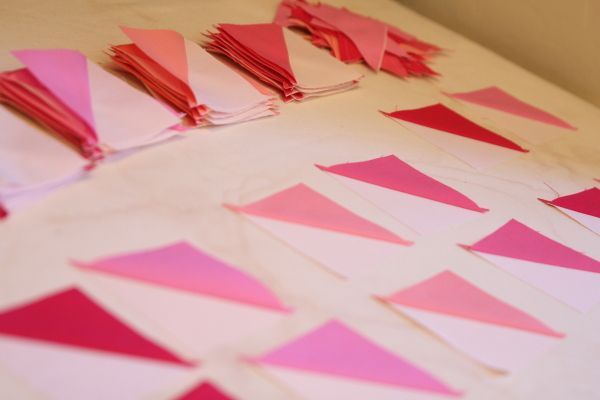 pressing and trimming batch after batch 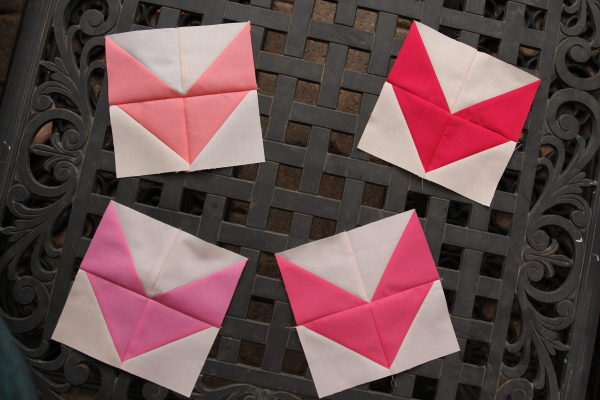 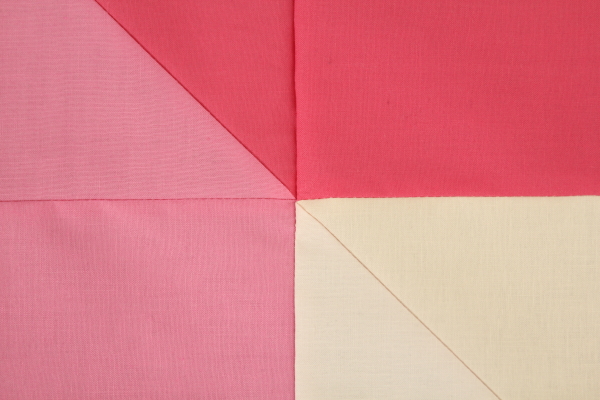 here's a close up that shows the two background colors i'm using: pearl pink and pale flesh. the color difference is very subtle, but in person, you can actually detect it. in photos, they tend to look identical. when my eye catches the difference as it roams over the quilt shapes, it always give me a little surge of delight inside, for some reason.

now to finish those hearts and get the borders on so i can get this quilt to my aunt!
Posted by hydeeannsews at 1:04 PM