some fmq tricks and blips 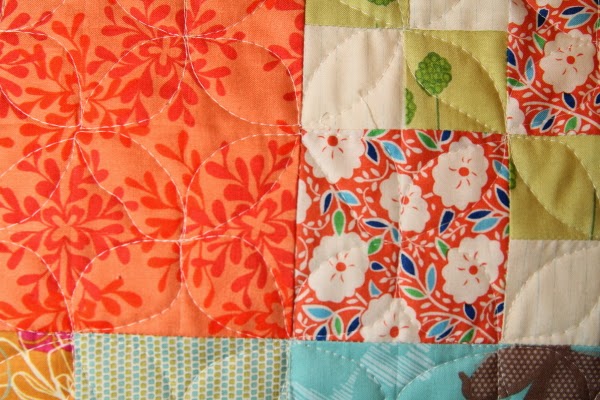 for anyone that was unduly impressed with my dogwood/orangepeel fmq on my penny patch quilt just examine this photo a bit. i'd like to say this is from the begining of the process, but it's actually from nearly the end, when i should have had the pattern perfected, right? or from when i started getting tired of the dang thing and became frantic and sloppy. 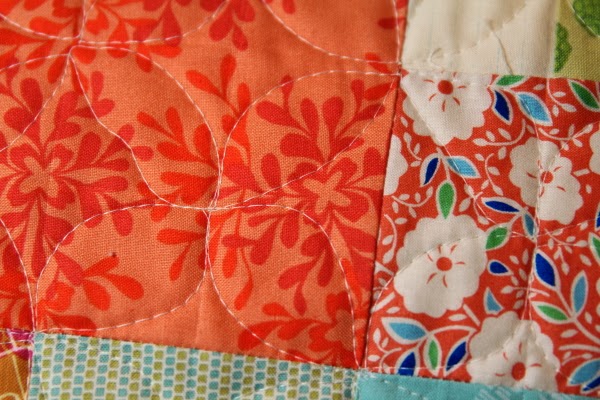 a view of the back shows that one more clearly: 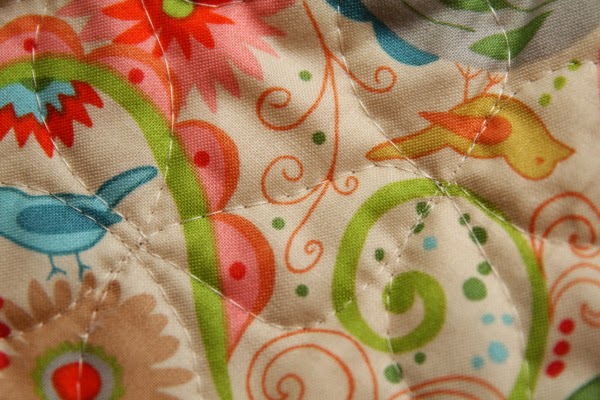 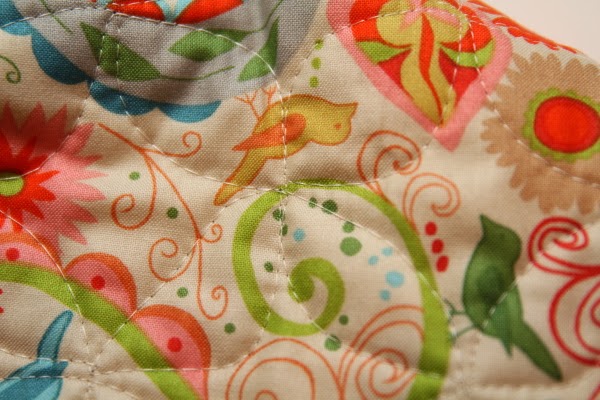 people always wonder when to unpick and when to leave a mistake alone. really, it's a personal decision based on what you'll be able to live with later. in a quilt with hundreds of these petals, this is rather insignificant, but these two did not pass muster. out they went. sure, it was a pain, but they crossed the line. when i have blatant gaffs, i always think, "well, i've put this much effort into it already, i might as well spend just a little more time and make that correction." it's worth the extra effort to not be forever taunted by the mistake when you use the quilt later. without fail, that one spot will always be staring you in the face.

it seemed every time i did make a mistake like that, it was always in the most obvious squares where the thread contrasted strongly with the fabric, yelling out the mistake as loud as could be. that may simply be that it was noticeable because of the contrast and the squares where there was no contrast weren't really any better, just better hidden. it didn't feel that way, though. 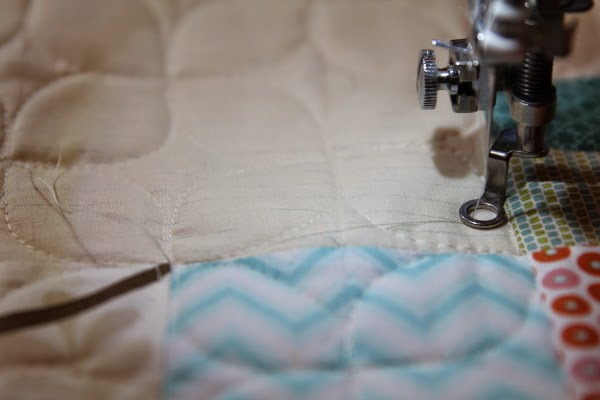 something i learned along the way was this handy trick: you can still use your auto thread cutter even when you need to leave a tail for tying off and burying. this photo, thanks to the shallow depth of field in macro photography, is not as clear as i'd like it to be, but it still demonstrates my technique. that bent black line in the lower left corner points to where my quilting ends and where i need to tie off and bury the thread. normally i would lift the needle, pull the fabric to the side, and manually cut the thread with my snips. this required me then lifting the quilt and awkwardly snipping on the underside, too. the threads were never the same length this way, which made for further snipping. somewhere along the way i realized i could just lift the needle, pull the quilt to the side until my thread tail was the desired length, and then press my auto thread cutter button. voila! equal lengths of thread each time and no searching for the bobbin thread under a mound of quilt.

i also realized after a while that when finishing off one area and moving to start in another, instead of cutting the thread before moving, i could cut after. as long as the two points were within reasonable distance of each other, this worked nicely. again, looking at the above photo, if i left off quilting at the upper corner of that blue chevron square and wanted to start next in the blue and green square, i would lift the needle when done and then lower it in my next starting point. after making a few stitches in place to secure the thread, i'd be off quilting. later, when i was ready to knot and bury, i'd just cut the thread half way between the two points, pull the bobbin thread to the top, and then finish off.

both of these tricks saved me a bit of headache and time. 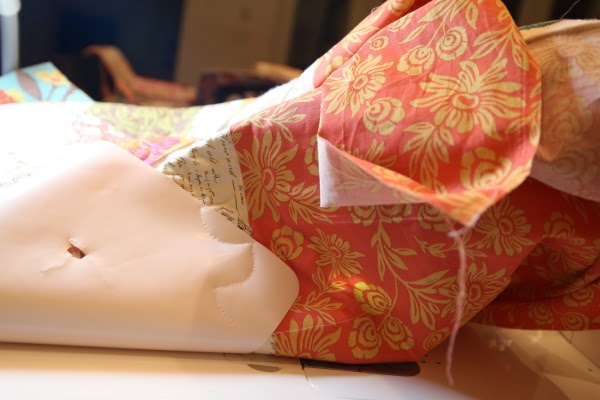 sewing my supreme slider to my quilt (for a second time, no less!) did not save me any time. what a mess. this time it happened not because my slider was linty and un-tacky. rather, i was messing in the bobbin chamber with the slider put out of the way to the side, bottom side up. i simply forgot to put it back into position when i got back to sewing. it slid right along with the quilt. poor slider is rather scarred now after all the accidental sewing. it may have to be replaced after this last fiasco. 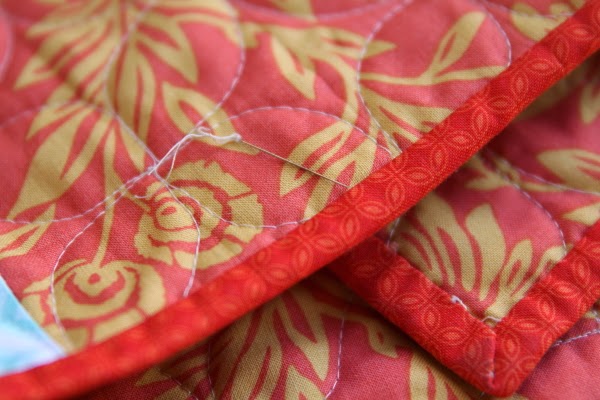 and the last "we can laugh about this later" moment of the fmq experience was literally the last moment of the entire quilt. i noticed when putting on the binding that i'd stopped two petals shy of where i was supposed to with the fmq. that was annoying, but fixable. i got those two petals completed and was tying off my thread to bury it when my darn knot went awry. this seems to happen a lot lately. i use the wrap know method, but sometimes the knot tightens before the tails pull through and you're left with a knot too high up and no room to get your needle buried. it can be worked out, but it usually takes several minutes and sometimes the thread breaks, which is the worst case scenario. so there i was, literally trying to put my last stitch in the quilt, with the thread stuck in a position that was too short for burying. i was thinking, "seriously?!!! can't i just finish this once and for all?" nope. the thread snapped and i basically gave up. i always do stabilizing stitches in addition to knotting and burying my thread, so i just let it go. if it comes undone at some point in the future, i'll deal with that later.

reading this one might wonder why i do this quilting business. yes, it has it's moments of insanity and supreme frustration, but in the end, there is a quilt. and that's worth it to me.

really, how many more new mistakes can i make?
Posted by hydeeannsews at 9:10 PM